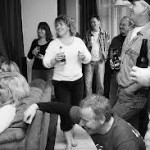 At only a stones throw from my house I have been performing in and around Compton Acres for about 10 years,

This weekend was no different and with me being invited back to the same family to perform at their sons birthday party.

This was the fifth year they had asked me back to perform a magic show as I think it was more from the demands of the children.

Every year I adapt my magic show and change parts as due to the majority of work being referral I need lots of different fresh ideas in my show.

After lots of hard work and dedication, I am very proud of the magic show that I deliver to children and it is a privilege to spread the magic and create so much fun.

For children I offer various party packages depending on the sort of party you are having. My party package details are clearly explained on my website here  https://www.alexmagic.co.uk

My parties are aimed at 3 years old and upwards with the emphasis on fun and envolvement.

On my site on the childrens tab you will also see a video of me in action. You will see all of the children having a good time and having fun, this is how every one of my parties are.

As well as the children’s entertainment I also perform at private parties, wedding and corporate events. I am an expert award winning sleight of hand magician which is guaranteed to fool any audience . Details again can be found on my website. https://www.alexmagic.co.uk