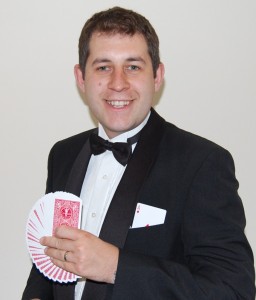 Last Saturday my adventures continued and I was invited to perform in Woodthorpe Nottingham.

This was a repeat booking as the couple had seen me previously and wanted me to perform at their private house party. It was a lot of fun and there were lots of guests of both adults and children.

The couple had seen me before performing sleight of hand close up magic at a wedding but they were also aware that I did a great childrens show so they decided to book me to do both.

I have won many awards fro my close up magic and it is very tricky to explain what I do without really showing off but please have a look at this clip where you will see me in action, performing live  http://www.youtube.com/watch?v=NQkpVx7Hyt4&feature=plcp

I always get great reactions like this and it is a great talking point at a wedding, corporate event or even a private party. I am often told I should have my own TV show…… we shall see.

Children’s Entertainer Woodthorpe Nottingham – For this perties as there were some children I was asked to do a magic show for the children in the conservatory. This worked really well and my show is aimed at 3 years olds and upwards and last for about 40 minutes.

Children’s Entertainer Woodthorpe Nottingham – my show has lots of helpers and is very funny and has lots of magic and I often get booked throughout the year for many birthday parties and functions.

Here is me in action, performing live

Childrens Entertainer Woodthorpe Nottingham – as you can see I do indeed offer balloons, mini disco, games and facepainting you can see full details here on the link  https://www.alexmagic.co.uk/childrens-entertainer/

Magician Woodthorpe Nottingham – If you would like to know my prices or more details please get in touch to discuss the details.  alex@alexmagic.co.uk